Get your first Open edX platform up and running with this detailed step-by-step how-to guide that provides detailed instructions on how to build your AWS EC2 Ubuntu Linux server, execute the Open edX native build scripts, and configure your new platform.

This installation script is based upon Ned Batchelder’s “Native Open edX Ubuntu 16.04 64 bit Installation” method. The first time I installed an instance of Open edX, in many ways I felt like I was on the outside looking in. The project documentation that exists is very good, but, it assumes an extensive knowledge base that, at the time, I lacked. This article attempts to fill in some of the gaps in that knowledge base, and hopefully, make the Open edX platform more accessible.

This is a fully automated script to stand up a single-server full-stack production-ready instance of Open edX running on an Amazon Web Services (AWS) EC2 (Elastic Compute Cloud — aka virtual server). The script installs the following Open edX modules:

It also installs all required subsystems and all optional modules. It installs everything on the single server instance in which you initiated the script. That is, this script does not provision nor assume any additional AWS resources.

Once this script is completed you’ll find the complete application software code base in /edx/ and a list of the automatically-generated strong passwords at /home/ubuntu/my-passwords.yml. You should keep the passwords file in your home directory because downstream devops procedures need this file and expect to find it in this location. Additionally, you should make an offline copy of the passwords file.  Do not change the file ownership, nor group, nor permissions of the passwords file.

The Open edX platform leverages a plethora of technologies, and this tends to be a formidable stumbling block for all of us, initially at least. For what it’s worth, I know a lot about a few of Open edX’s technologies, and almost nothing about everything else. Unlike the official documentation, this page attempts to assume as little as possible. Hopefully it helps. Good luck!

You should create a fresh server instance per the instructions / screen shots that follow. Some advice:

Following is a down-and-dirty set of screen shots to walk you through the key server attributes in terms of size, security and so on. If you’re unfamiliar with Amazon Web Services then you can start your journey here: https://aws.amazon.com/getting-started/.

Login to your AWS Account. Navigate to the EC2 console. Look for an action button that reads “Launch Instance” 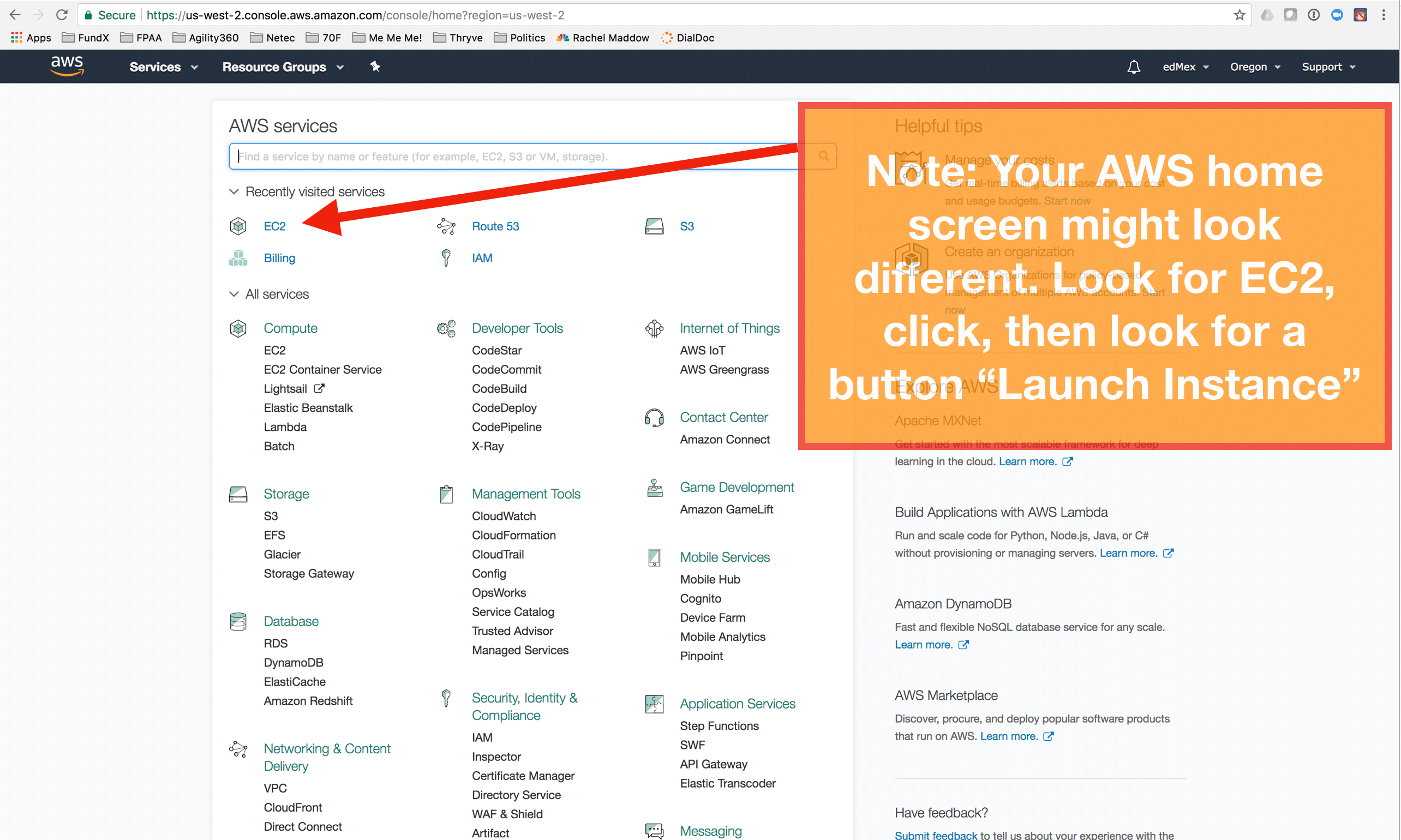 AWS provides you with a pick list of several common server operating systems. Technically speaking, each of these options is an AMI (Amazon Machine Image) that AWS internally maintains and makes available to their customers. For you, this means that you’re able to spin up an Ubuntu server in a few seconds, without needing to worry about where the operating system repo might be located and so on. 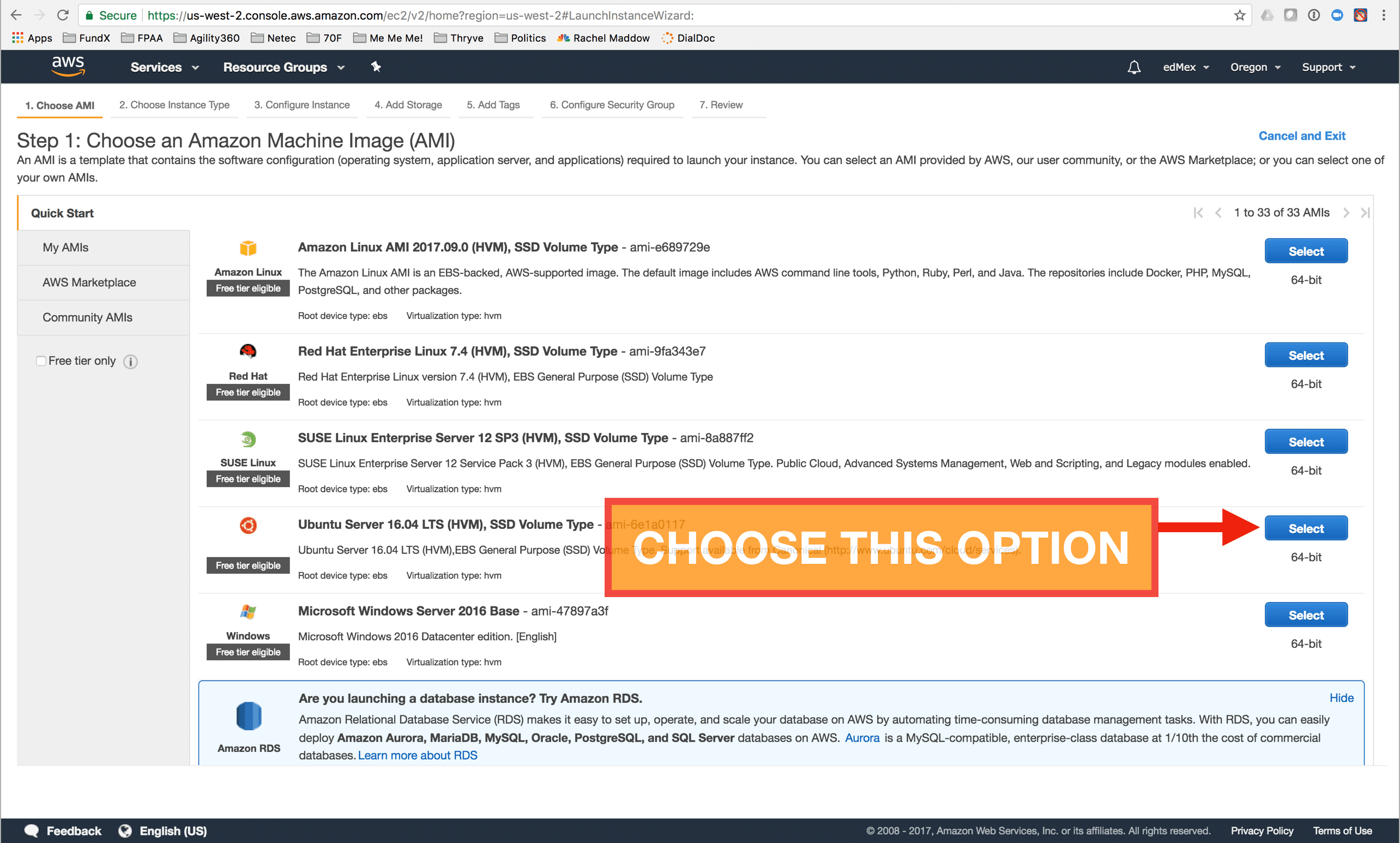 AWS EC2 Server Sizing: After prolonged experimentation I have gravitated to AWS EC2 T2.Large servers as my virtual server configuration of choice. Generalizing, this provides 2 cpu’s and 8gb of memory, which is sufficient resource for a small production implementation. As of September 2018 AWS charges $0.0928 per Hour ($67 USD per month) for a t2.large server. You can dramatically reduce the cost of the server by purchasing a one-year contract for the server instance, in which case the cost reduces to $42 USD per month. I launch these with 100gb of drive space, which thus far has been far more than sufficient for my needs. Bear in mind that my recommendation is almost exactly double that provided in the official edX documentation. My view on this is that it’s already challenging enough to get this platform up and running without adding unnecessary challenge by under-sizing your equipment.

Very generally speaking, this server config should handle a couple hundred concurrent learners. Look at the bottom of this page for links to downstream repos that are part of a simple horizontal scaling strategy for small (but not tiny) institutions. 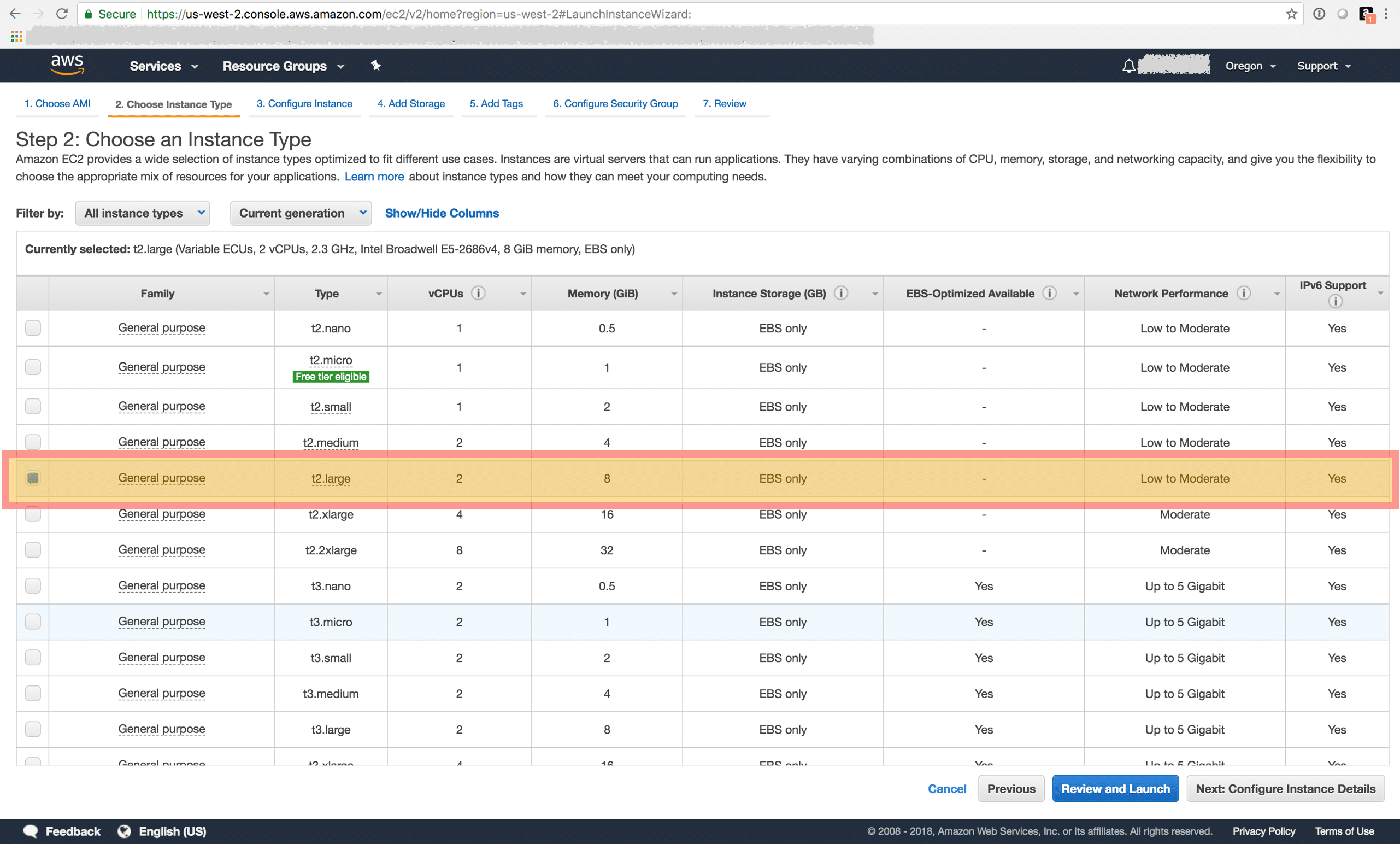 Note: AWS only charges for time that your instance is running. You can stop the server from the AWS EC2 console at any time, which is logically identical to powering down a physical server.

The default values provided in this screen are what you want. Later on it would be a great idea to revisit these settings to get a better understanding of your infrastructure-level configuration options. 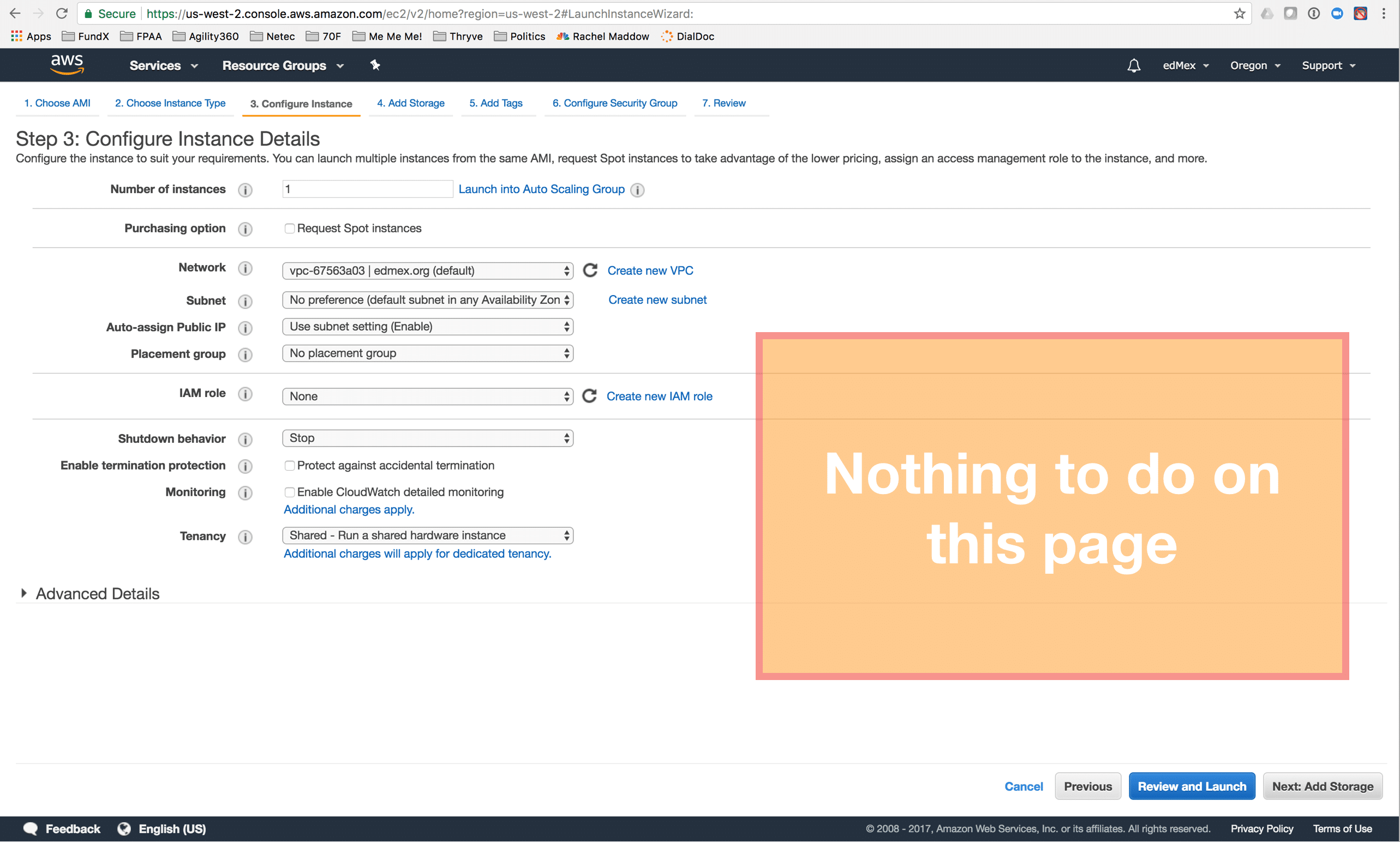 AWS instances by default come with 8gb of “hard drive” storage. However, you can modify this. You’ll need at least 50gb of storage for Open edX plus normal amounts of data. I suggest doubling that amount, to 100gb. I have not seen that this impacts the cost of the server in any meaningful way. 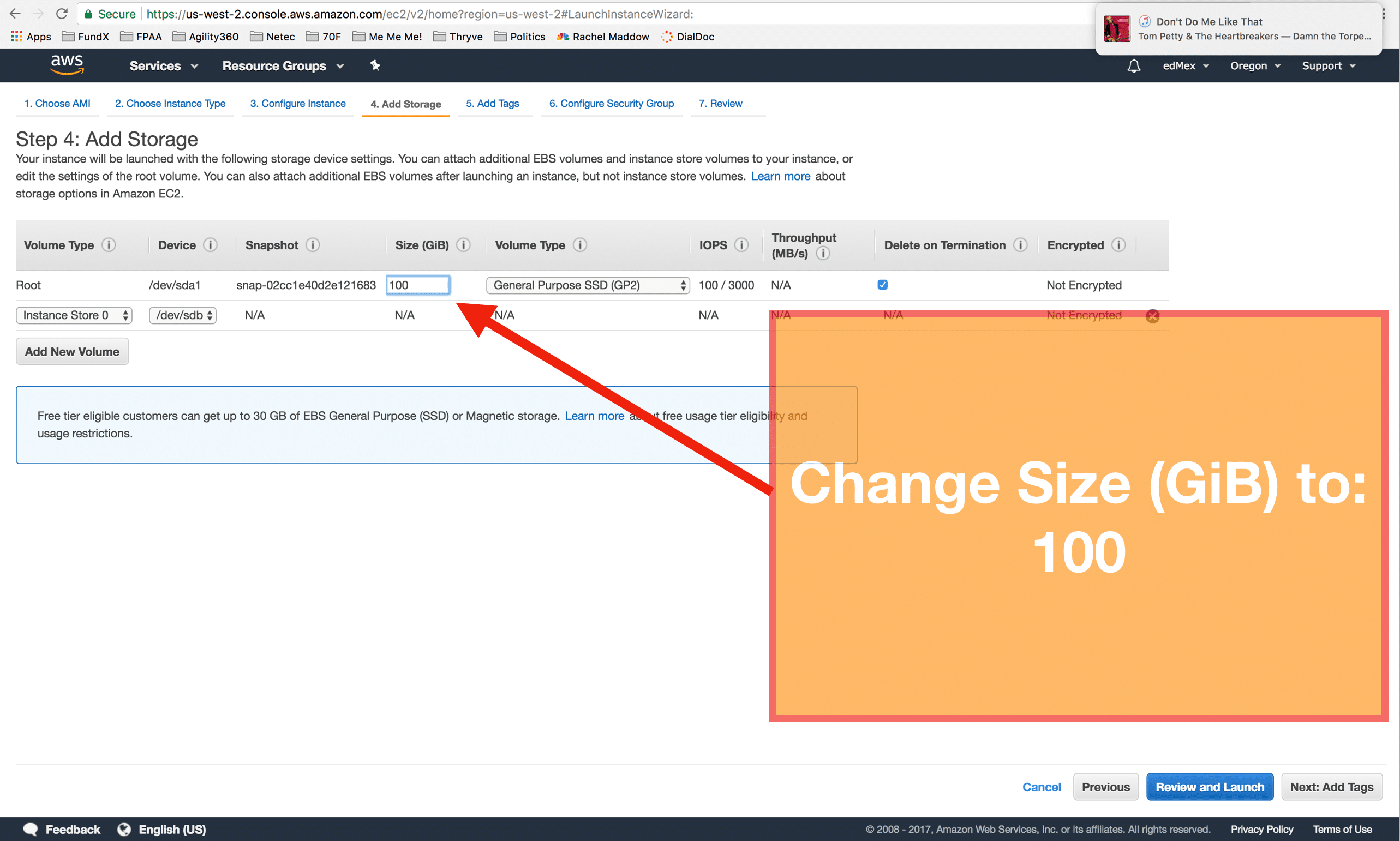 Tags are a way to identify AWS resources inside your account. This is only important if you have many resources (for example, many server instances) in existence in your AWS account. Otherwise you can skip this step. 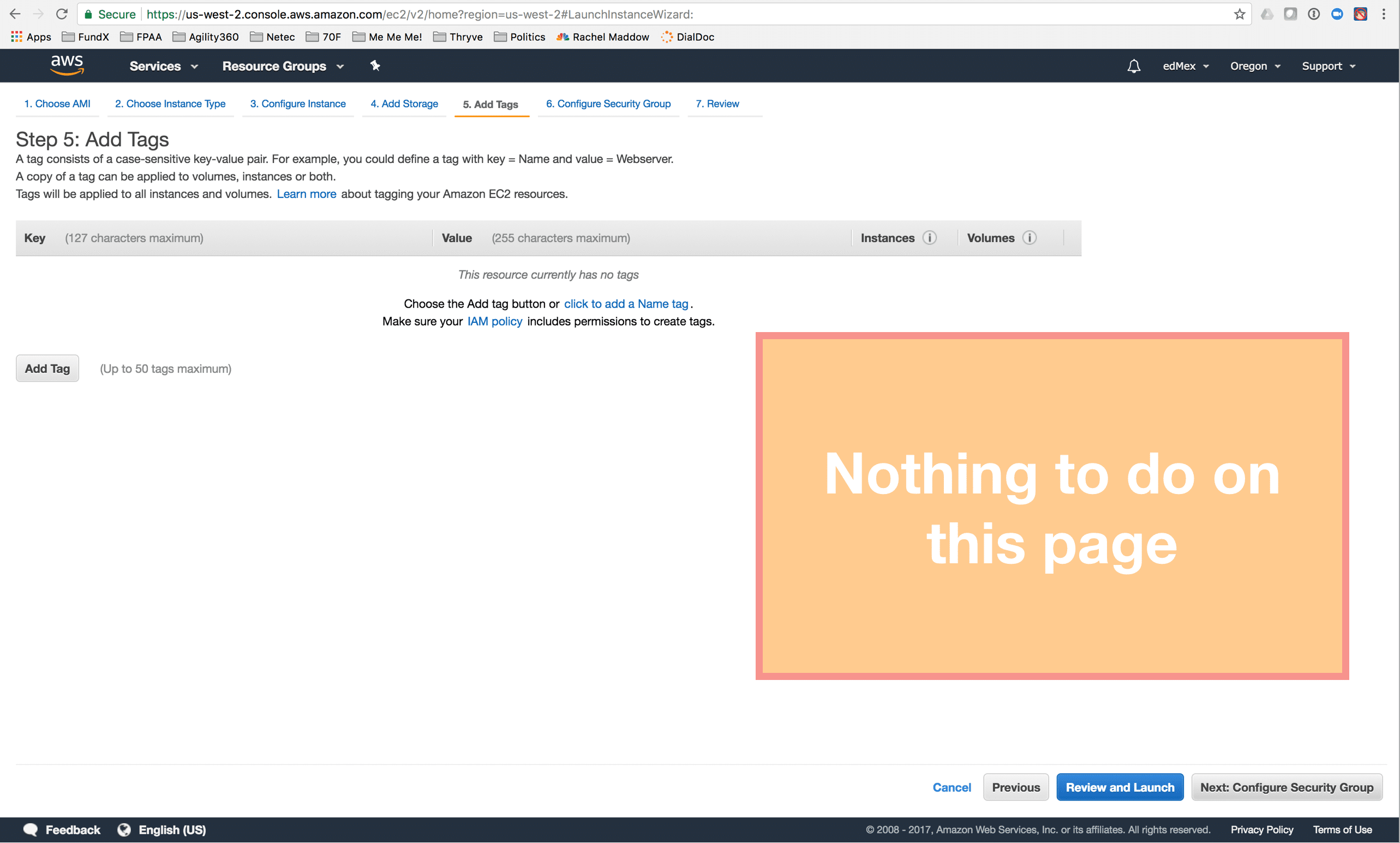 This is important. You manage server port settings separately from the server itself. Generalizing, you create a port security profile, and then assign this profile to your EC2 instance. Open edX uses many ports as part of the standard installation. Note that this script installs ALL modules, and you therefore need to open many ports. Open edX default http addressing uses port numbers rather than subdomains or url paths/routes. The ports in the screen shot that follows correspond with the following Open edX modules.

Some of these urls lead to a landing page, others do not. 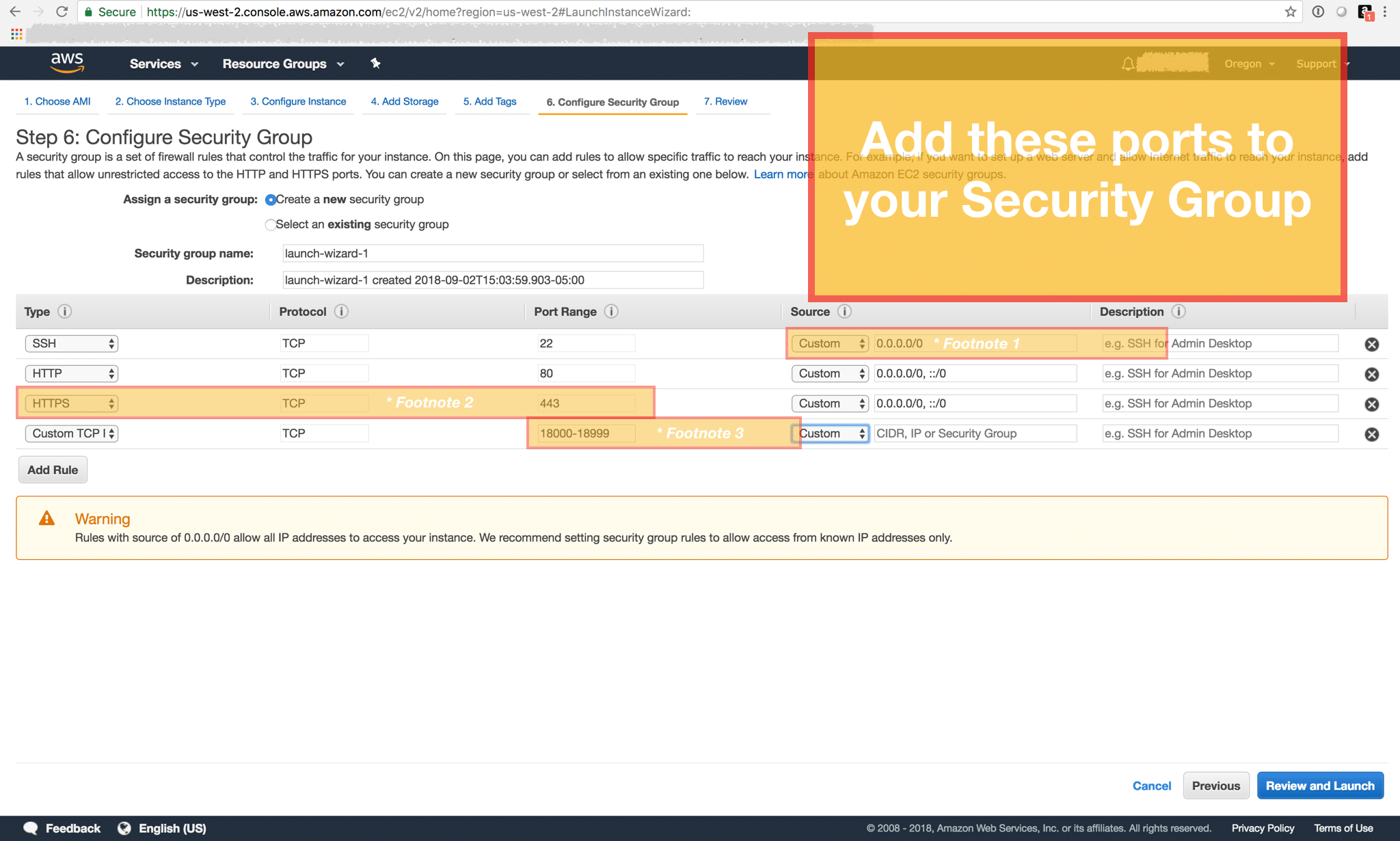 Step 7: Review Instance Prior to Launch 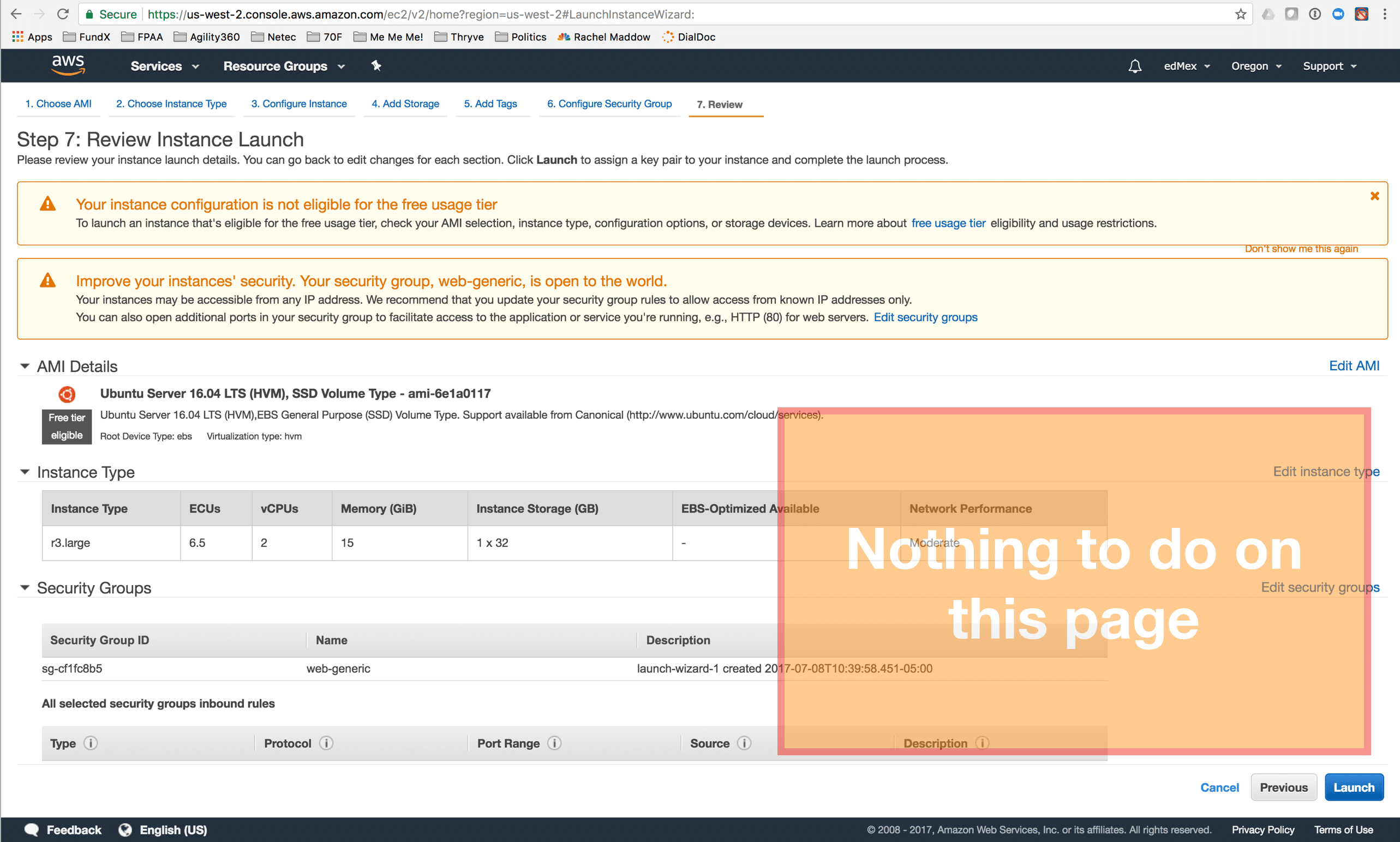 You’ll use a terminal emulator via SSH to connect to your server. If you’re unfamiliar with how to connect to a linux server then you can start your journey here: http://docs.aws.amazon.com/AWSEC2/latest/UserGuide/putty.html. Note that you will run this script as well as execute nearly all Open edX admin utilities from a linux command line. So, if you’re new to this then you should bite the bullet and do some online self-study on using linux terminal emulators and SSH. 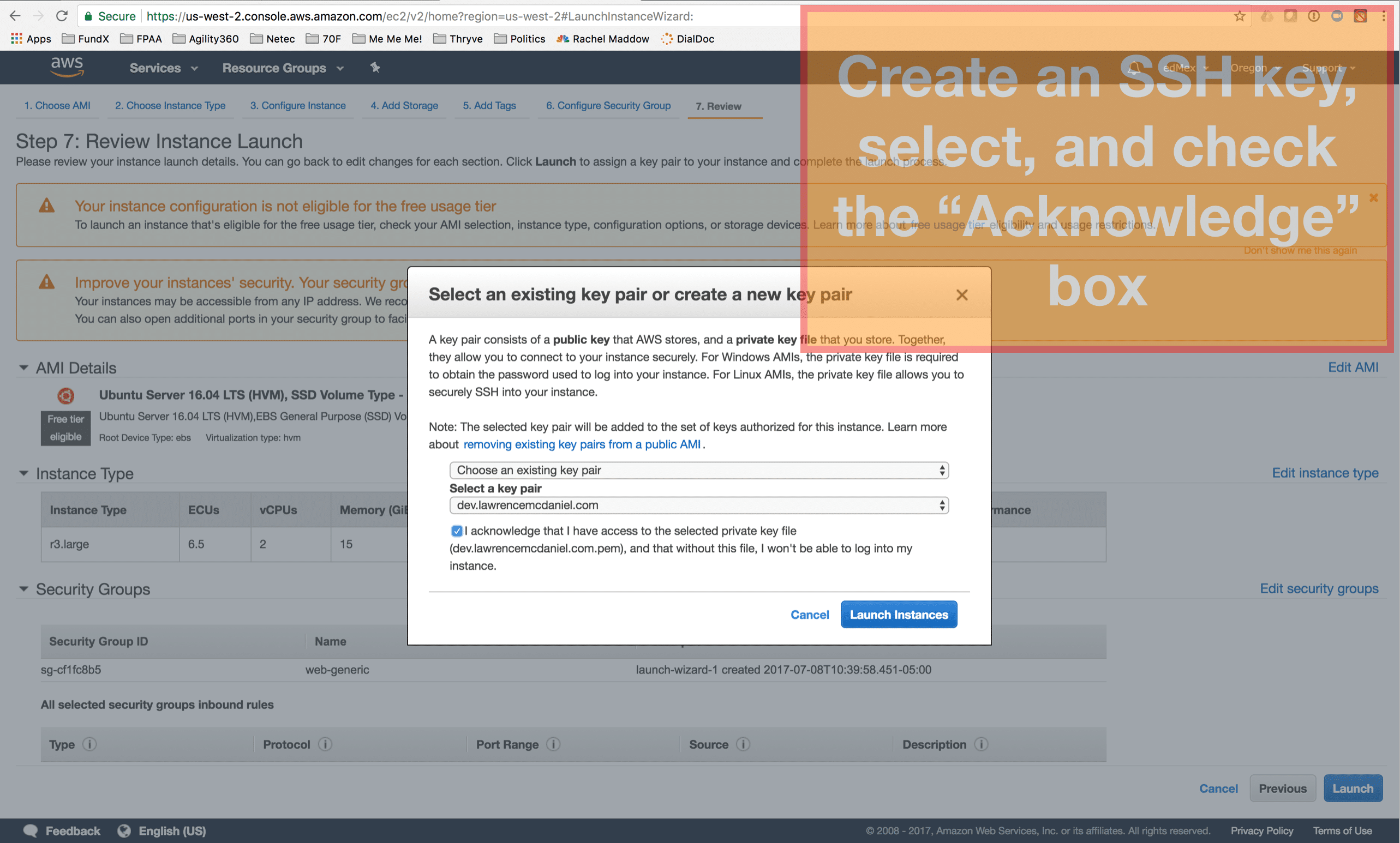 Click the blue “View Instances” button at the bottom-right of this screen. 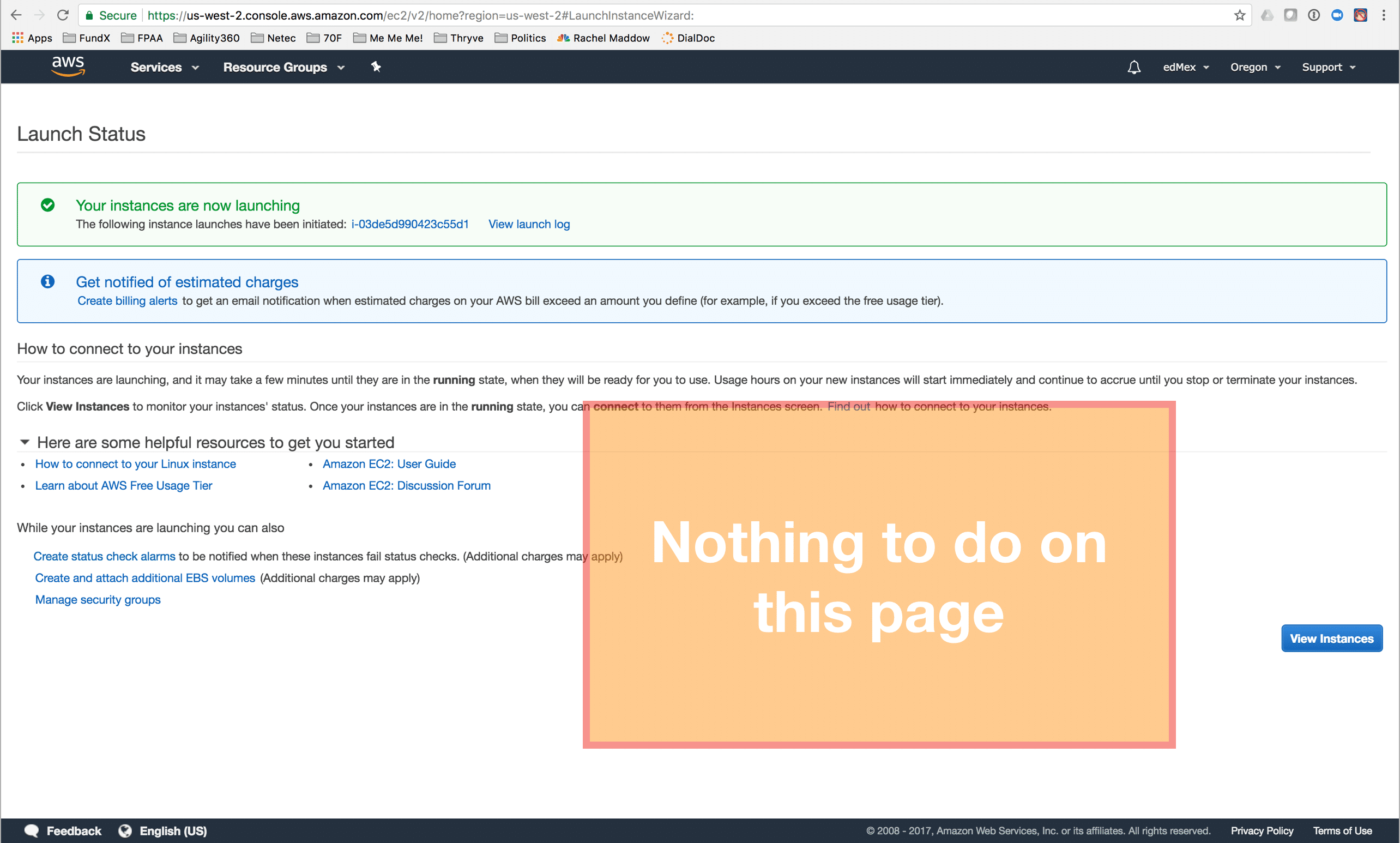 If this is your very first EC2 instance then you’ll see a single row on this screen that shows the vital signs of your new Linux virtual server. It will take a few minutes for the server to instantiate itself and come online. When the server is ready the “Instance State” field will read “Running” and the icon color will change from yellow to green. 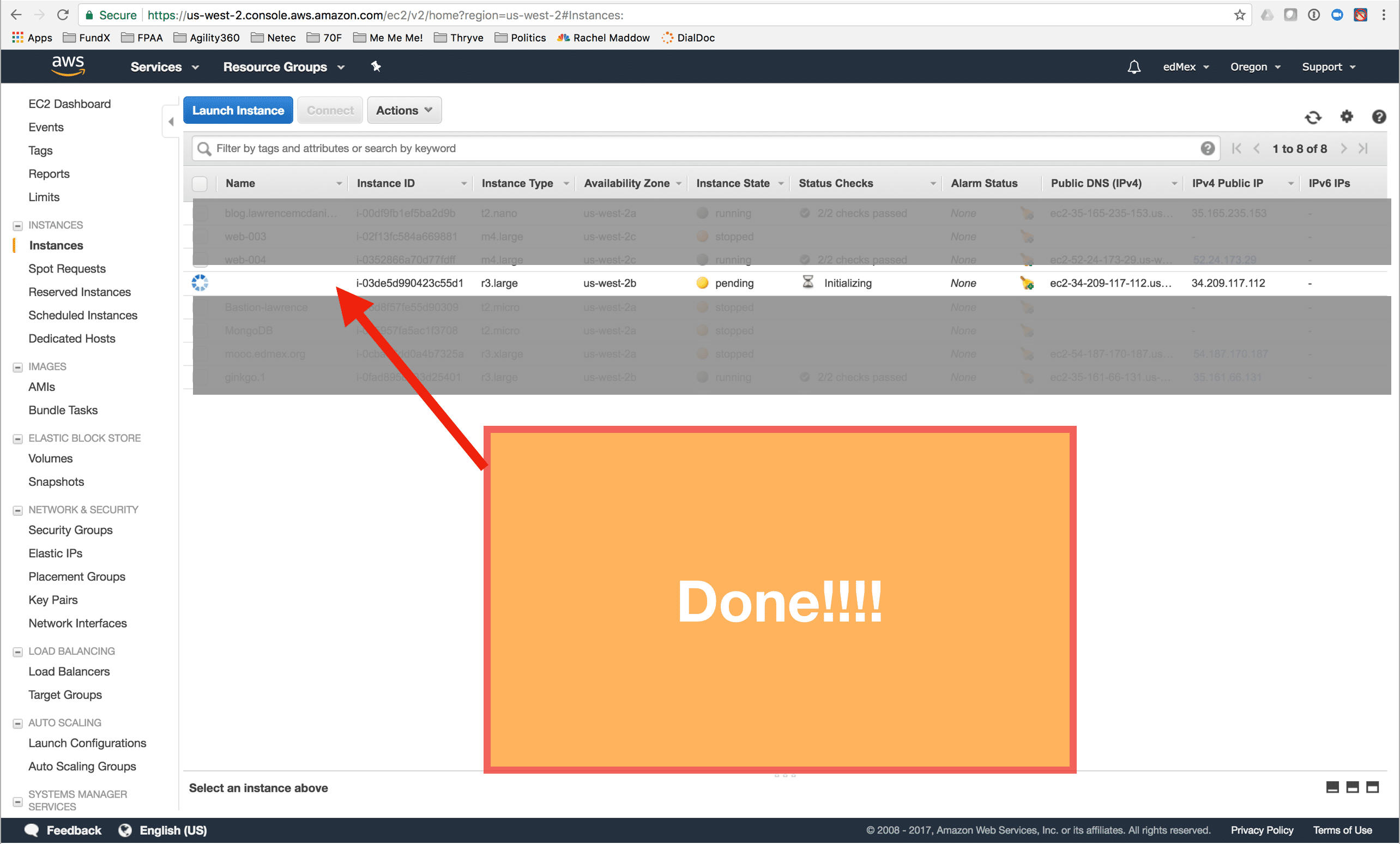 You are now finished with the AWS management console. Hereon you will interact with your EC2 instance using a terminal window over SSH.

This script takes around ONE HOUR to run and is intended to be spawned on a background process as follows:

Then, after your server comes back, create a config.yml file. This is required by the Open edX installer scripts beginning with the Ironwood release.

And finally, download and run the Open edX native build script. This script will install Ironwood.master by default, but you can edit the file and change this to any version you want.

You can read more about the nohub directive here: https://en.wikipedia.org/wiki/Nohup. As relates to this usage, the combination of the nohup directive along with the ampersand at the end of the line will cause the script to launch on a new thread. That is, it will not execute on the thread that is managing your terminal connection. Thus, when you logout of the server (or if the connection is inadvertently broken) then the script will continue to run until completion.

I suggest using up to three additional terminal windows to monitor progress of the script.

Editorial Note: I am a Linux neophyte at best, and I hope your newfound knowledge of such fact brings you hope.

III. Verify that the script worked 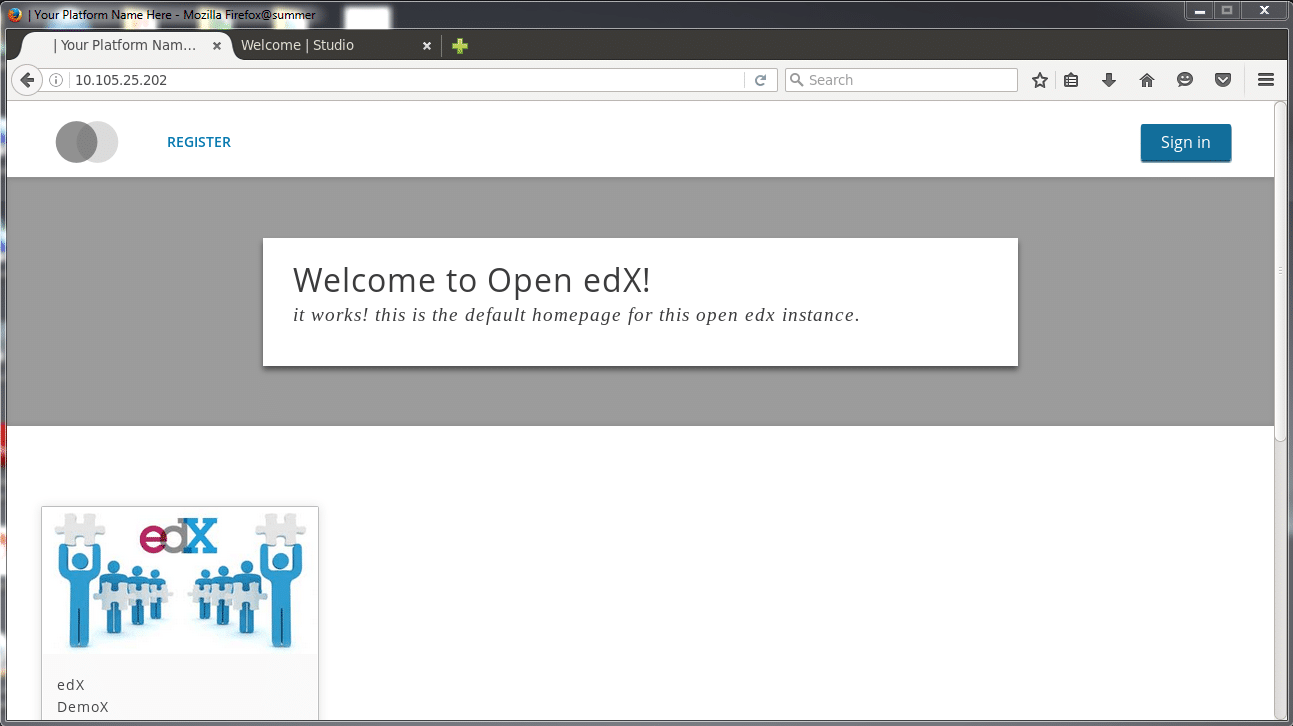 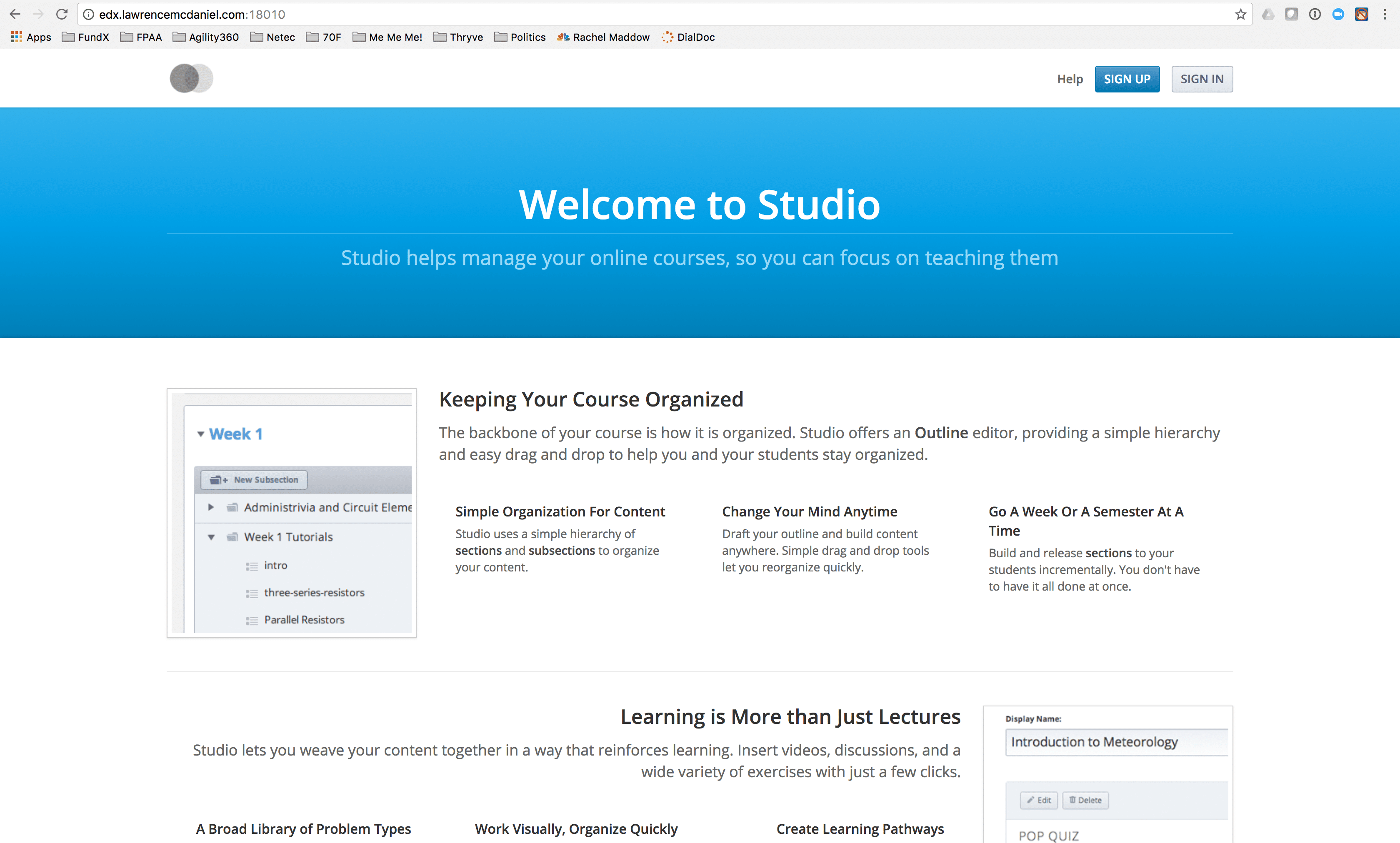 If the installation was successful then you should see the following: 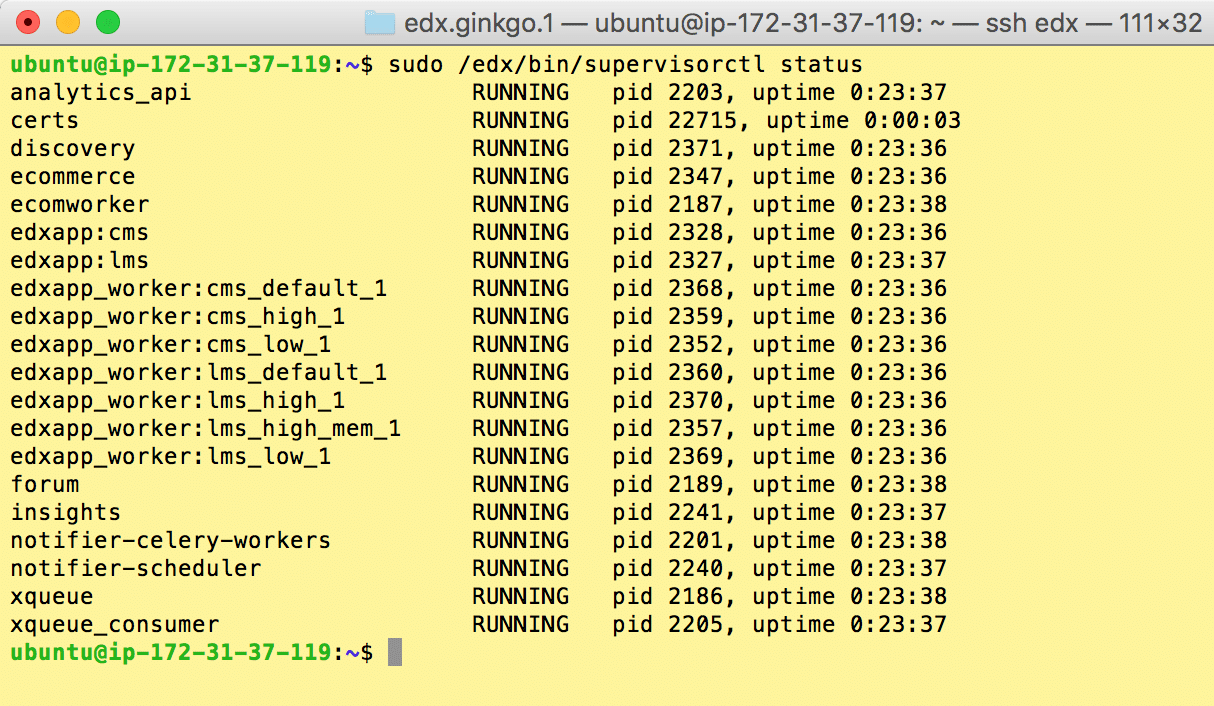 You can save yourself a lot of future busy work by creating a root / admin account in this instance, prior to creating your AMI. Following are the commands to create a new superuser from the terminal command line:

Read more here to learn about what an AMI (Amazon Machine Image) is, and how it is used: http://docs.aws.amazon.com/elasticbeanstalk/latest/dg/using-features.customenv.html

Meanwhile, here’s a screen shot short cut that at least points you in the right direction of where to go and what to do. 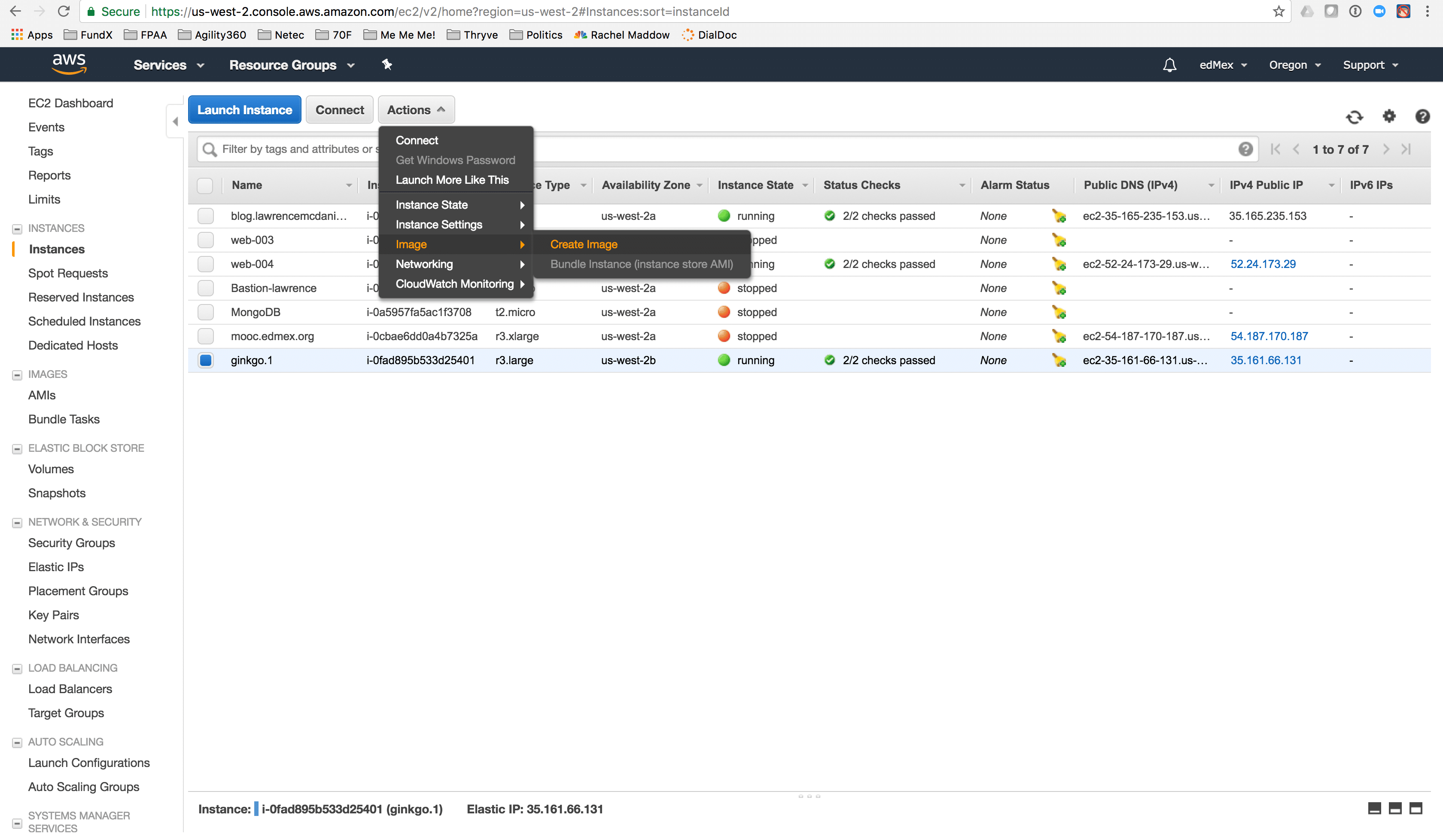 The native installation program creates four json files located in /edx/app/edxapp/ which contain the most important Django application parameters for your Open edX platform including for example, the name of your platform and the domain name. Unfortunately, the files are not user friendly, and to make matters worse, there is no way to add documentation to a JSON file.

Bear in mind that there are additional steps that you still need to take in order to prepare your environment for a production deployment. Following will get you started on the most common additional platform requirements for most types of institutions and organizations.

Note that https://github.com/edx is the official repository organization for Open edX software. Also note that there are a gazillion repos in this organization. Peruse, download and experiment with these at your own peril. And at any rate, keep in mind that the only two repos you need in order to stand up your instance are the two listed above — the names and purposes of which i assume will never change in future.

The script installs a multitude of subsystems, including:

The complete platform creates a labyrinth of folders within /edx. However, a short list of these are of particular interest, and are worth the time it takes to explore in order know each’s contents.

Open edX’s Hawthorn release is a major platform upgrade that includes many feature improvements and new features. appsembler wrote an excellent blog post not only describing many of the new features in detail, but also explaining how to enable these features.

The installation scripts are based nearly entirely on Ansible playbooks and bash scripts. In both cases the Open edX devops team pushes the envelope on what these technologies can do. As impressive as this is from a technology professional’s perspective, it’s daunting to wrap your head around what this code does at ground level. I leave you with a few suggestions:

While the playbooks are challenging to read and understand, I can vouch that they all work as intended; at least, during the initial installation. Future admin activities to fire-up, shut-down, upgrade, and downgrade the various subsystems also depend on the use of these playbooks. So, do not attempt to circumvent using these or you will regret it.

About the Author: admin