How Much Does Open edX Cost?

Open edX is the industry-leading open source online learning management platform, but how much does it cost to setup and operate? The good news is that Open edX is a platform that can fit into most budgets, even while you’re trying to figure out your needs and requirements. Lets take a closer look at the fundamental elements and key drivers that you should consider while developing your project and operating budgets.

Open edX is a free and open source software project, but that only regards the cost of the software itself. You still have to develop courses, and procure a server and system support, plus you’ll need someone with the expertise to configure and potentially modify the source code so that the platform meets your project’s requirements. So, how much does it all cost? How much do other, similar project teams typically spend? These are tricky questions. And it’s hard to get started if you don’t yet know what to ask.

Fortunately from a budgeting perspective at least, many projects can squeeze into a one-size-fits-all box. If the cost of the project is a key factor for you and you can confidently state that your installation of Open edX will be *a LOT smaller* than that of say, HarvardX, and you can also state that your requirements are somewhat flexible, then it becomes possible for us to generalize budgeting assumptions, which is exactly what I’ve done in this article. Otherwise, you probably should not rely on the material in this article.

DISCLAIMER: Now, having said that, you must take everything that follows with a grain of salt. THE FIGURES IN THIS ARTICLE SHOULD BE INTERPRETED AS SANE DEFAULTS GIVEN THAT YOU HAVE ABSOLUTELY NOTHING ELSE SO FAR TO GUIDE YOU.  While all of these figures are grounded by my own real-world experiences, you have to recognize that every project is unique and that it’s ultimately up to you to rigorously analyze your project’s economic requirements.

How To Interpret The Figures In This Article

Open edX is both modularized and parameterized. In all cases below, without exception, I assume that you are choosing from the range of available options that come prepackaged in the general release of the software. 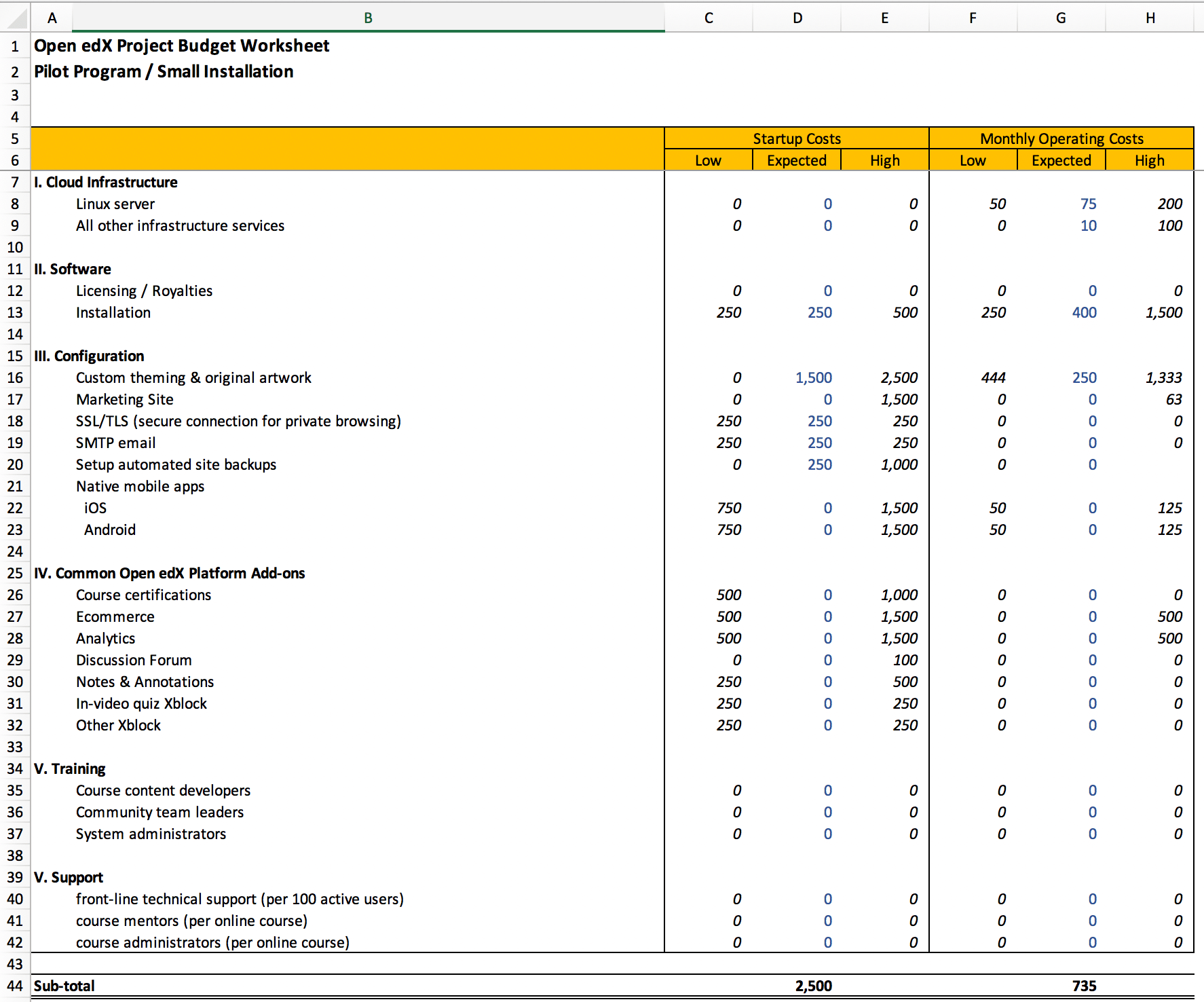 You need a server. Open edX is a free open-source software platform, but you still need a server on which to run it. These days we use cloud-based virtual servers. You need need other stuff too, but mostly it’s the virtual server that makes up nearly the entirety of your your IT infrastructure budget. Virtual servers come in many different sizes and configurations. You want a 2-processor server with 16gb of RAM and 100gb of “hard drive” storage space. This will typically cost $75 per month; a price that can be lowered by as much as 40% by purchasing the server on an extended contract of one, two or three years.

You should keep a couple of things in mind while you’re shopping for your IT infrastructure solution. First, The cloud IT infrastructure industry is anecdotally equivalent to “Ford, Chrysler, and Chevrolet”, and like the auto makers, there’s little differentiation between the three principal providers Amazon Web Services (AWS), Google, and Microsoft. You’ll get the same server, and comparable ancillary services regardless of which of these providers you choose. If you’re ambivalent then choose AWS since that’s what the community was quasi-standardized on during the time period when most of the platform’s technical documentation was being drafted. Otherwise, and especially if you already have an account with, and are comfortable with one of the other two, then stick with that provider.

Second, you’ll most likely be installing Open edX on a single virtual server. Take note however that when researching Open edX infrastructure requirements you’re prone to encountering some pretty complex IT infrastructure planning documents and diagrams. You can probably ignore them. They originate from large educational institutions who have shared this information for the benefit of the Open edX community.

* Your response to this poll is anonymous. I will not request any personal information from you.
You might also be interested in this article from appsembler’s blog, “The True Cost of Hosting Open edX Yourself.”

The good news: Open edX is free!!! That is an absolute statement that is exceedingly unlikely to ever change. There is no purchase price, there is no annual maintenance fee, and there is no “pro” upgrade. pretty awesome.

The bad news: A lot of software, like the Windows operating system for example, comes with a GUI setup program that guides you through the installation and setup process. For many good reasons, Open edX is not one of those. If you’re technically inclined and you enjoy a challenge then try these DIY installation instructions and god speed. Otherwise, you’ll need to budget to hire someone to lead the installation of the basic software platform for you. The Open edX community maintains a list of service providers; many of whom can perform this installation for you.  Incidentally, I’m one of those service providers and I charge a fixed price of $250 USD to perform this installation. You can read more about the details here.

Additionally, there are several aspects of configurations that are out of the scope of the software platform itself, but tend to be quite important anyway. For example, the Open edX platform needs to send a lot of email for new user welcome messages, lost password reset instructions, course enrollment confirmations and so on. But Open edX does not come equipped with a sophisticated email server, so, you need to integrate such a system. Following are some other items that you might want to consider including in your project, and how much I think you should budget for quite basic requirements in each case. The amounts below are quoted in $USD.

Open edX is a modular software system. When someone says, “install Open edX”, they’re usually referring to the default installation which includes the online Learning Management System (LMS), and the Course Management Studio (CMS). These are both excellent software systems — best in their classes in my humble opinion — but these two modules combined usually do not meet all of the requirements of a typical project. Following are some other, optional modules and/or installation options along with the minimum amount that I think you should budget for each.

Of the projects in which I’ve been involved that were arguably not as successful as they could have been, training (in my opinion) was a contributor to problems downstream in the project. I’ll offer you a couple of observations that are directly related to budgeting. First, most professors find the CMS intuitive, and frankly, they need little direct assistance in conceptualizing and authoring their courses. And second, most professors struggle with the same sets of obstacles, such as an unfamiliarity with working with pure HTML as well as working with digital media like video and still images. It behoves you to stage some pilot training in order to get some first-hand feedback on where the problem areas lie, and then to build your training around your own observations.

Meanwhile, I’ll respectfully ask you to borrow my confidence that you need to allocate a meaningful portion of your budget towards training, even though at the moment you understandably lack specific details. Following are my suggestions.

Your support needs will vary considerably depending several factors. The quality and design of your course content drives how intuitive and fluid the learning process will be for students. Also keep in mind that support cost is basically labor cost. If your project is based in a high cost, urban center then you should adjust accordingly.

Additionally, any delays in server response time will typically cause spikes in your help desk. The different types of Open edX pedagogy components load your server in different ways. For example, if you host a lot of computer programming courses that require a code grader program like “Code Jail” then each time the grader is executed your server will take on slightly more work for a few seconds. If *many* students are trying to submit their homework at around the same time then this could potentially impede the performance of your server in which case your students will potentially inundate your help desk.

Of course, there are also the normal types of user help desk requests: can’t login, lost passwords, the computer ate my homework, and so on. A soft launch is a prudent way to gather accurate field data on how students, and your IT infrastructure respond to regular work loads. In the meantime these are my best guesses in lieu of more empirical data.